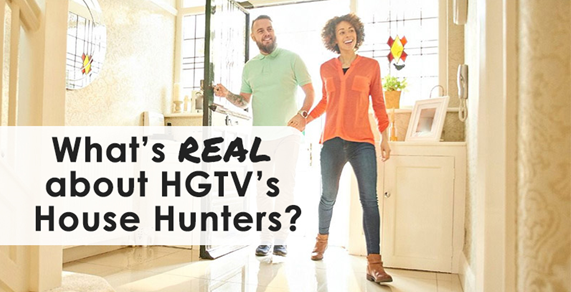 The bickering...real or not? Couples meltdown over paint color, or bicker about bath size. Apparently, some of that's real. The show isn't scripted, but producers urge people to exaggerate dislikes and disagreements. People like hamming it up.

The home purchase...real or not? The show involves looking at three homes and picking one. However, the buyers have already purchased their home before filming begins. The other two houses often aren't for sale, and might even be Airbnb.

So...how does it look "real?" At the end of an episode, the show jumps several months into the future to see the couple in their new home. However, the show records the future update at the same time as the house-hunt scenes. According to one participant, "They moved all our stuff out to a moving van, filmed the home vacant, then moved all our stuff back in and filmed it like we just moved in."

The compensation...good or not? The pay to the house-hunting couple is about $500, which is OK cash. The Realtors, however, are unpaid.

Want to get on the show? It's hard work. Applicants have to answer essay questions about their house search, do a phone interview, and submit a video audition. Many buyers are turned down for not having an interesting storyline. It's a lot of work, but apparently, people who appear on the show have only good things to say about their experience.